Sway Reacts To Stogie T’s Widely Viewed Recent Freestyle. Stogie T has proven many times that he is one of the best lyricists the country has ever bred. Even with all the compliments and accolades the rapper doesn’t cease his attempts at delivering more raps.

Last week the G.O.A.T decided to drop a Freestyle performance which captured all SA hip hop lovers. One would swear he was putting out there a reminder that his style is unmatched. Impressed people didn’t just include local fans but international as well. Sway Colloway shared his two cents on the freestyle.

The two developed a musical relationship when Sway had him on his morning show. The way Tumi set the stage in fire with his raps, to this day people are praising him.

Calloway was evidently in touch and on the lookout for the rapper’s new releases. Again he was impressed. 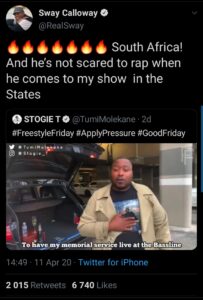