Home
\
Entertainment
\
“He has done nothing compared to me,” Cassper On Comparison To AKA

“He has done nothing compared to me,” Cassper On Being Compared To AKA. For the umpteenth time now the beef of Cassper and AKA is topping the trends on social media. The person to evoke now is Cassper who revealed he isn’t afraid of Mega.

Last month AKA became the topic of many discussions on social media when he went for Mufasa. He dissed him in a number of ways writing about how he has a small d*co, boasting about beating him up in front of his friends and challenged him to a boxing match. Kiernan put more insult to the wound by calling him a moffie another term for gay and dissing his parents.

After receiving backlash AKA apologized only for the word Moffie but still expressed desire to fight Cass. After the rant the FREE rapper limited his activeness on social media.

After confirming that the boxing match will happen, Cass comes forward to shake social media once more. He let everyone know that he is better than AKA because he has done more things. 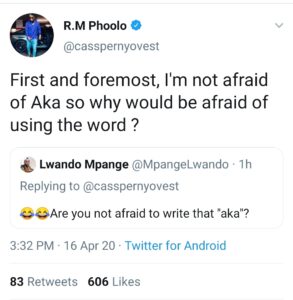 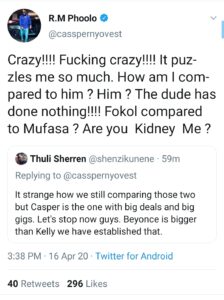